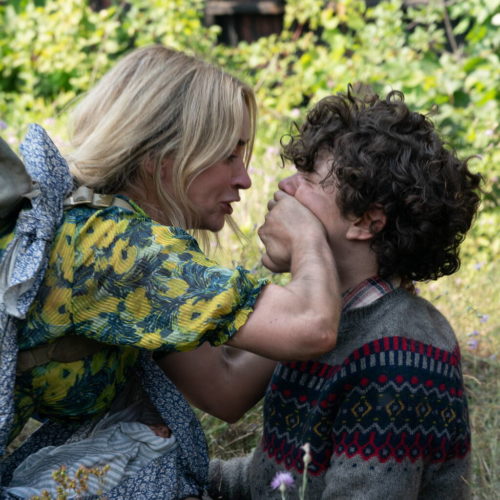 Verdict: A Quiet Place Part II doesn't match the standard of the original but it's still a thrilling and exciting watch

Emily Blunt, Noah Jupe, and Millicent Simmonds reprise their roles as the Abbott family in this sequel to the 2018 horror.

Considering 2018’s A Quiet Place was such a phenomenal success, it was no surprise Paramount bosses asked John Krasinski to return to direct and write this sequel.

Following a prologue, the film picks up right where the last one left off and it’s now day 474 in this new world, which is dominated by monsters who hunt by sound so everybody has to be as quiet as possible to survive.

While there, Regan comes across a radio channel that plays Beyond the Sea by Bobby Darin on a loop and she becomes convinced the song is a signal so she sets off to find the source of the transmission.

The original film was simply focused on the Abbotts and their experience of the monster apocalypse, so it was inevitable that the sequel would expand the world more.

While it’s interesting to see how others have been affected and what the country looks like further afield, the movie becomes more sprawling, the pacing isn’t as tight, and the narrative cuts back and forth between different characters and storylines so loses some of the essence of the original.

Part II also feels like less of a horror than the first. Although there are a couple of decent jump scares, it was more of an unsettling thriller with many moments of effective heart-pounding tension.

The first instalment was a standalone story that didn’t necessarily need a sequel, whereas this film is so open-ended that you need to have a third movie to conclude the Abbotts’ story.

Even though a third film hasn’t been announced yet, it is obviously going to happen because Part II essentially feels like a bridge between number one and three and the narrative just gets them from point A to point B to set up the next storyline.

Simmonds, who is deaf in real life, was the emotional heart of the first film and is the star of the show here – she gets an exciting storyline that drives the narrative forwards and has such a captivating presence.

However, Blunt gets the short straw as Evelyn doesn’t really have much to do, which is a shame because she had such a central kickass role the first time around.

A Quiet Place Part II doesn’t quite live up to the standard of its predecessor and it should have had a proper conclusion, but it is still an exciting and thrilling film with sound design that can only be truly appreciated in the cinema.

In cinemas from Thursday 3rd June.